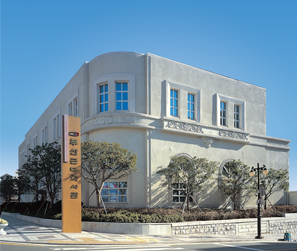 Busan modern history hall, which was built in 1929 during Japanese occupation period, was first used as Busan branch of Dongyang-Cheocksik Co., LTD which was built to exploit the colony and from 1949 after liberation, it became Busan Culture Center of American Oversea Bureau of Public Information.

Since then, with continuous request for restoration from citizens of Busan the American culture center has withdrawn and was returned to Korean government. The city of Busan purchased it in June of that same year. Since it was an icon of invasion, we have made it into Busan Modern history hall in July 3, 2003 to use it as an educational place to remind the people of the tragic history.

In the exhibition hall, we can see it in one glance the three-dimensional displays such as, model structure, film & media including over 200 pieces of modern history relics. Besides that we are trying to be a museum to become closer to the citizens of Busan through a special exhibition with various themes, interchange exhibition, operation of museum program and continuous academic research of modern history.