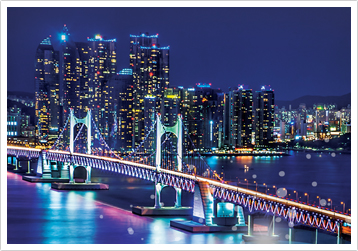 Since a project to install thousands of LEDs was completed late last year, the Gwangan Bridge has held spectacular nightly LED shows. Shows will run for five minutes at 8 and 10 p.m. from Sunday to Thursday and at 8, 9 and 10 p.m. from Friday to Saturday.

Visitors are able to experience the beautiful views of Gwangan Bridge fully illuminated while enjoying listening to various styles of music such as Can-Can by Jacques Offenbach and ‘Pa Pa Pa’ by the Korean pop girl group Crayon Pop. Different lighting combinations will be shown displaying various colors and shapes which will all be set to music.

The light shows are named Wings, after the flapping wings of a seagull; Fireworks; Gwangan, which shows the faces of citizens in honor of Busan; Hands, which displays a variety of shadow puppets; and Eyes, which shows a set of shining eyes reflecting of the glassy surface of the water.

The special light shows are scheduled to be displayed during the New Year’s holidays, Children’s Day and during other special occasions.